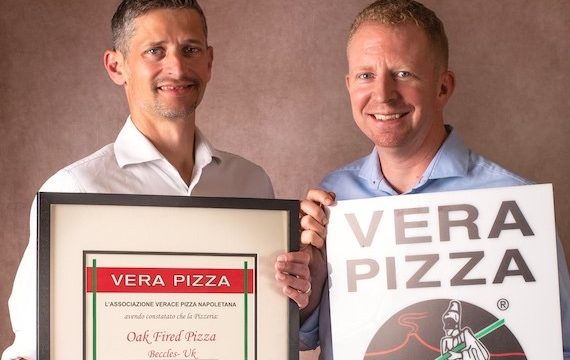 Valoriani UK is delighted to hear that one of its wood-fired oven customers – Oakfired at The Royal Oak in Beccles, Suffolk – has become only the third restaurant in the UK to have achieved a prestigious international quality standard and officially become part of what UNESCO has deemed “intangible cultural heritage”.

The eatery, which has a Valoriani wood-fired Igloo pizza oven, is owned by Paul Williams and Paul Jackson and has just been awarded hard-to-attain accreditation from the Associazione Vera Pizza Napoletana (AVPN), based in Naples. This allows it to legally claim to be able to offer its diners ‘real Neapolitan pizza.’

Paul Jackson is the eatery’s wood fired pizza chef, or pizzaiolo as it is called in Italy. Having trained extensively with the experts in Naples, he has now been recognised as being able to prepare and cook pizza in the authentic manner required by the stringent AVPN.

Oakfired at The Royal Oak is now the only Neapolitan pizza venue between London and Newcastle, for foodies who want to get the food authenticity that comes from eating food straight out of a wood-fired pizza oven.

Oakfired fittingly becomes only the third eatery in the UK to gain AVPN accreditation in what is National Pizza Month. Its success will be celebrated by its loyal fan-base of diners, the oldest of whom is 94 years old!

Valoriani UK’s Andrew Manciocchi says: “We are delighted that one of our Valoriani Igloo ovens is at the heart of the action at Oakfired at The Royal Oak. We know that the AVPN like to recommend Valoriani ovens and this is further great news for us and the Igloo wood-fired oven that has enabled Oakfired to achieve its goal. We would urge any other pizza chefs wanting to put Italian food authenticity on the menu to look to use a Valoriani wood-fired oven, if they wish to also serve up first-class wood-fired food cooked to perfection in an oven that turns out the very best pizzas the length and breadth of Italy and not just in Naples.”